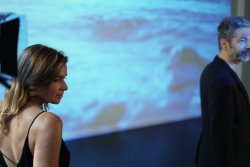 ‘Not a dance of death, but instead a bluesy party.’
Els Van steenberghe (Knack)

Paradise Blues is Jessa Wildemeersch’ recent travelogue. ’Travelogue’, yes. Wildemeersch is fond of theater and travelling. That’s why she often does her research while traveling. In 2018 she went to Russia, with two actresses,  in search of the Russian soul and Chekhov’s Three Sisters.
Their play The Boar is watching us was an ingenious mix of travelogue and crisp, exciting repertoire theatre. Paradise Blues is inspired by Wildemeersch’ residence on an Island in Lake Como and the meeting with an Italian archeologist. She writes, directs and plays together with harmonica musician Steven De bruyn. His music guarantees that this piece is not  a dance of death, but instead a bluesy party.