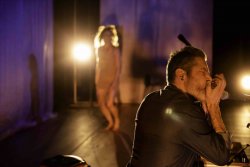 'Paradise Blues is an exceptional piece, no shortcomings and no excesses.' Hilke Pattyn (Veto)

"It started in Center Parcs," Jessa Wildemeersch reveals. That is where her desire arose to know what comes after this life. It started with counting. Every second counted there is a second closer to death.
With Paradise Blues, Wildemeersch provides an overview of her search for heaven, or whatever comes after death. Her insatiable curiosity about the hereafter creates a palpable tension not to have to die immediately.

In her search for answers she spoke with different people: young and old, male or female, religious or not, she registered all voices with her iPad. They form the guideline throughout the piece.

In contrast to Center Parcs, the decor is less child-friendly. Several empty surfaces are immersed in a soft light. They go hand in hand with a maze of threads and remarkable musical instruments.

Paradise Blues is an exceptional piece, no shortcomings and no excesses.

Wildemeersch is flanked by Steven De bruyn at the start of the play. His soft words make his music sound all the more powerful. The alternation between the electronic harmonica sound and the soft atmospheric music provides structure in the piece.

The music is enhanced by an increasingly cool light. The atmosphere builds up and the encounter between Jessa and the dubious Italian archaeologist Fabio blurs the line between a travel story and brainwaves.

In a villa on a small island in Italy, Wildemeersch makes an effort to organize her thoughts. With the image of gently splashing water in the background, she describes the moment when she realizes that she needs to revise her idea about the hereafter. Wildemeersch makes it clear that to think about the afterlife you also have to think about death. You cannot skip a step.

Supported by a confusing combination of Italian gelato and a white shepherd dog, she becomes increasingly involved. Her sometimes tumultuous search is seamlessly illustrated by the mysterious music of De Bruyn and Wildemeersch’ excellent acting performance.

As a spectator you lose track of time and it feels like you are in Italy with Wildemeersch and De bruyn. The combination of a staggering story and extraordinary atmosphere creates an exceptional piece, no shortcomings and no excesses.

What initially starts as a chronological summary of the making of a theater piece, ends in a dwindling reality that makes us fantasize. As spectators, we are left with a bemused feeling after the performance. Does the picturesque villa really exist, does the charming Fabio really exist, but above all: does the hereafter really exist?